Would you be surprised to know that more than art—possibly even more than mathematics and milkshakes—David Walsh is mad about books?

As such, our library is no mere appendage, and certainly no ‘monument to ego’ (as Umberto Eco would put it), but rather a working research space that we invite you to use. Just lower your voice, you hooligan, and spit out your gum.

Our collection reflects David Walsh’s tastes (which are both prolific and eclectic; as a kid he had no friends, so decided to dedicate his small life to reading, in Dewey order, the entirety of the Glenorchy City Library. If you have the choice, we recommend friends instead). As he’s got cooler, David’s collection has grown, and now encompasses thirty thousand titles in a range of formats. They cover topics relating to artists and works in our collection, of course; but also relating to the broader interests of Mona as a whole: architecture, science, philosophy, statistics, literature, maths, ancient Egypt, African art; as well as wine, beer, betting odds, religion, socialism, sex, and that old chestnut—death. 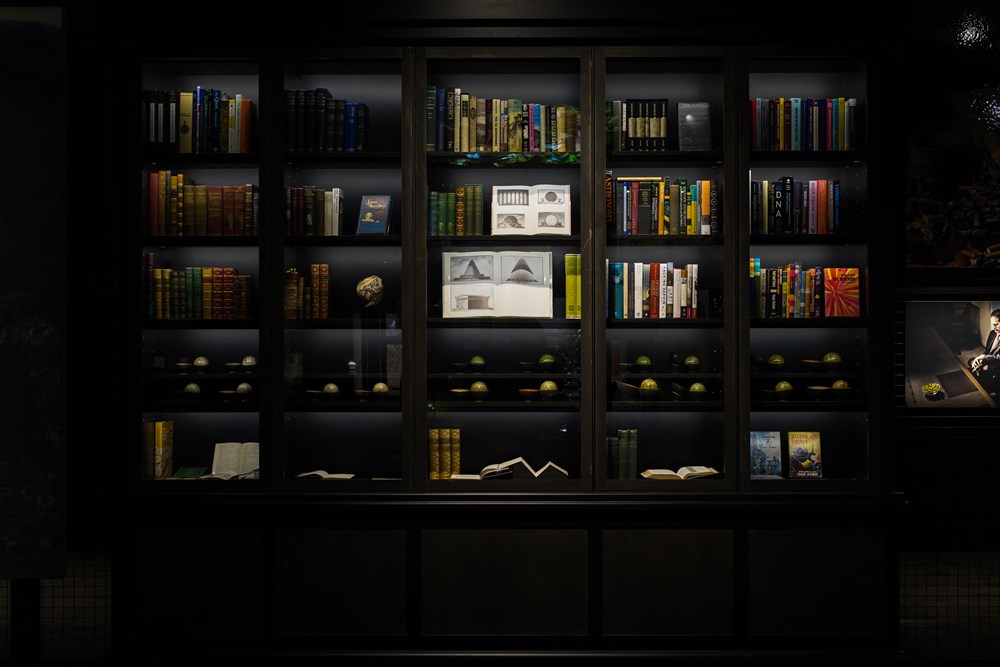 In recent years David has indulged a love of rare, signed editions—although he continues to wonder why the ‘specialness’ seems to matter to him, provisionally concluding that it has something to do with the remnants of religious observance, a kind of hangover of his Catholic upbringing. The fruits of his Catholic guilt include: a first edition Lolita, an early edition of On the Origin of Species, signed editions by Umberto Eco, J.G. Ballard, and Hunter S. Thompson, and hand-written documents by Balzac, Whitman, Flaubert, Einstein, Newton, Marconi, and Alexander Graham Bell. Many of these are not on display at the moment as there’s not enough room, but a new, bigger library is on the cards… Watch this space.

For now, the library is housed in an extension to the Round House, which was designed by Roy Grounds for the parents of Claudio Alcorso, the founder of the original Moorilla site—read more about Moorilla here, and about the architecture of the Mona site here.

Visitors, members of the public, researchers, academics, and school groups are all welcome to use us as a reference library (sorry, no loans), or even as a place to have a quiet sit down amid the noisy chaos of Mona / life.

*Obvs. not including wife, children etc.

The O
Siloam
Interview with James Pearce
About